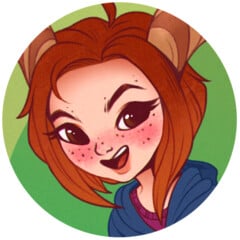 Hello! I'm Molly, a Senior Environment Artist at Blizzard working on Overwatch 2. Before that I worked at Certain Affinity on Hogwarts Legacy, and New World (Amazon's MMO). I've also worked on Marvel and Star Wars videogames along with other popular franchises.

In my free time I work on my own indie game under the company I co-founded, as well as create illustrations and cute merchandise that I sell on my Etsy shop. I love telling stories, creating worlds, and bringing characters to life. I've always had a strong interest in crafting everything from novels and cosplays, to character designs. I graduated in 2014 from Ringling College of Art and Design majoring in Game Art & Design.